Who Is Dr. Thomas Burke?

Home » Who Is Dr. Thomas Burke?

I’m so pleased to have the opportunity to share the amazing story of my friend Thomas!  He’s a remarkable individual and it’s an impossible task to distill his life into just a few pages.  These are just a small number of highlights of his countless stories and lives he has impacted, but here goes! 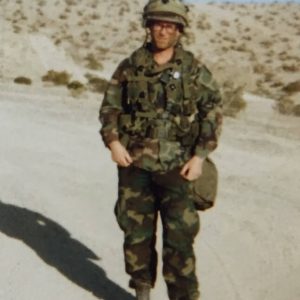 After getting his medical degree in 1989, Thomas spent 7 ½ years in the US Army where he started his world travels. Over that time, he was deployed with the Light Infantry as well as the 2nd Ranger Battalion across several regions of the world.

Thomas earned three Army Commendation Medals and in 1993 was awarded the US Military Meritorious Service Medal (the peacetime “Bronze Star”) for scoring the highest marks and being voted the best physician in the entire US Army.

During his time serving his county, the Army loaned Thomas out as a tactical physician for the FBI Hostage Rescue Team.

While working for the FBI, he provided medical support for domestic terrorism incidents. He was brought in to provide emergency support at both of the hostage incidents in Waco, Texas and Ruby Ridge, Idaho.

In 2012, Thomas was in Benghazi, Libya to work with the United States and leaders in eastern Libya (home of the opposition to Gadhafi) to improve the health system, which had collapsed over the years of Gadhafi’s rule. Thomas was there during the infamous attack when Ambassador Stevens lost his life.

During this time, Thomas developed a sense of what it takes to develop and execute successful business operations while nimbly maneuvering within the bureaucracy of large healthcare institutions.

But after seven years in corporate America, it became clear to Thomas that his heart was being pulled in a different direction…

Thomas was recruited to Harvard in 2004 where he has followed his passion and dedicated his life to the poor and vulnerable, at home and around the world. He has led widespread improvements in health across countries on several continents.

While Thomas has held many titles, he currently serves as the Director of the Global Health Innovation Lab at the Massachusetts General Hospital (MGH) and Associate Professor at Harvard Medical School and the Harvard T.H. Chan School of Public Health. 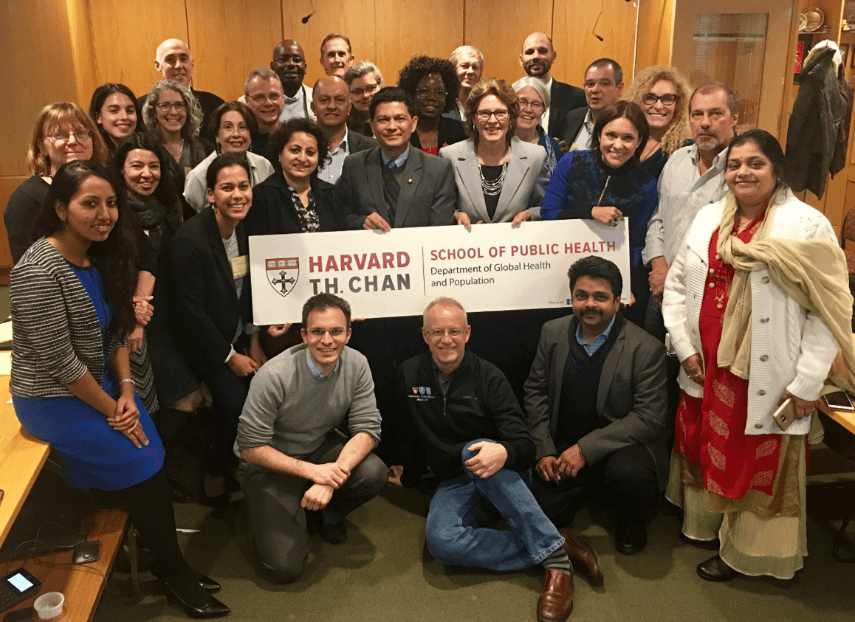 Thomas has published over 135 peer-reviewed scientific papers, two books, and over his career he has pioneered several award-winning advances like the uterine balloon and bubble CPAP. He’s conceived of, engineered, manufactured and commercialized, studied, and advocated for these innovations that have become part of nationally adopted policies and educational programs across many countries- improving the lives of millions of people.

Over these 13 years, Thomas designed a uterine balloon that is US FDA approved, costs 55 times less than its “competitor”, and now, 10,000 of these devices are produced each month for worldwide distribution, by Pregna International (Mumbai, India). Thomas has no financial interests in the UBT and despite his objections, the device carries his name….Dr. Burke’s ESM-UBT Kit! 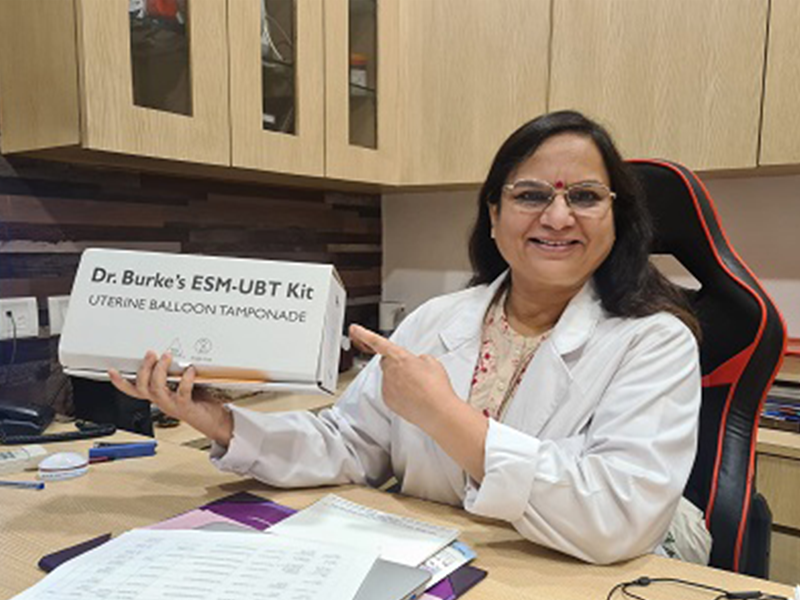 as well as several multi-country programs on maternal and infant survival and health.

Through his career, Thomas has worked to lower the human cost that food scarcity, disease, poor healthcare, and other systemic failures have wrought on low-resource communities. His initiatives have helped thousands of families globally recover and move forward from some of the most devastating moments of their lives. 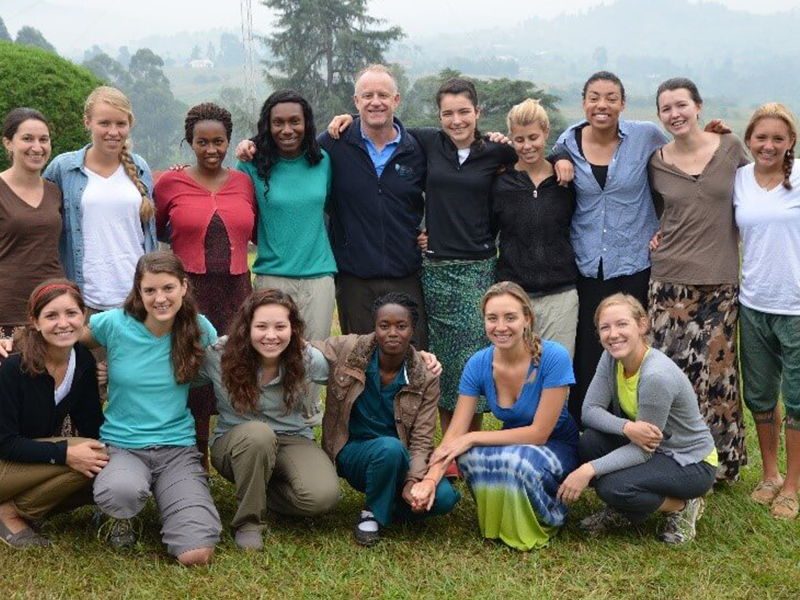 This photo shows one of Thomas’s many trips with students to Uganda to work on the Harvard College Global Hunger Initiative he started. 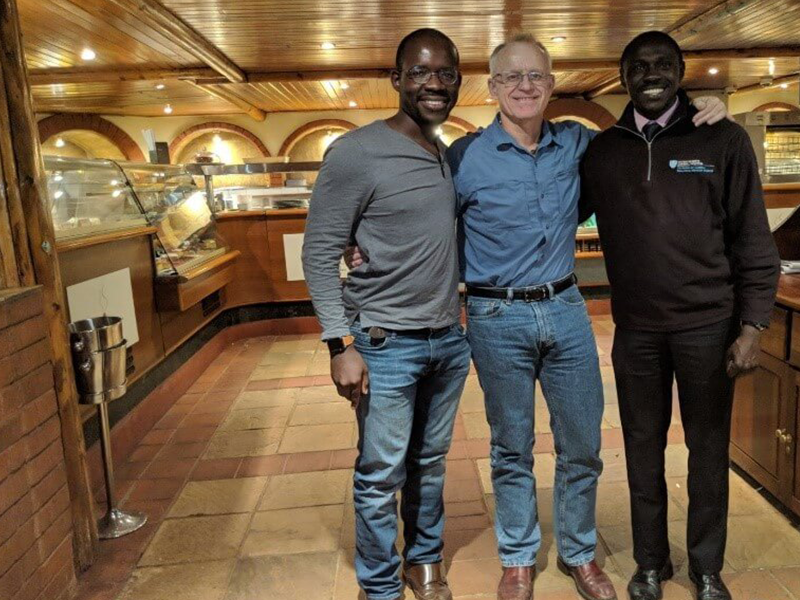 This photo shows Thomas with two of his mentees he’s supported over the years. Carlos (left) is from Kenya and Chol (right) from South Sudan. Carlos is now a Family Physician in TX and has been developing health system IT programs across Africa while Chol (formerly a child soldier) taught in a Harvard program and is now a Pediatrician in Kenya and South Sudan. 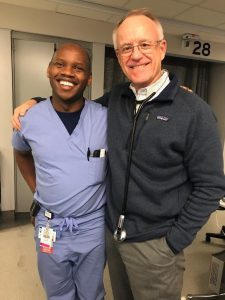 Shown here is Charles who is from a rural village in western Kenya and met Thomas while in school in Nairobi. Charles lived with Thomas for 2 ½ years and the two have developed a close bond.

Over the many years of their close relationship, Charles completed his doctorate at Oxford as a Rhodes Scholar, trained in psychiatry at MGH/Harvard, and is now Harvard faculty focused on mental health in the US and in his home country.

Hands On In Africa And Around The World

Over the past 30 years, Thomas has worked to improve the lives of vulnerable people in the United States, Canada, the UK, Italy, most of the 54 African countries, India, Vietnam, Nepal, Bangladesh, the Philippines, Brazil, Honduras, Peru, and Colombia.

He’s not only made an impact through his game-changing medical devices but also the people he directly touches.

In 2011, when South Sudan split from the North and became its own country, the medical school collapsed. 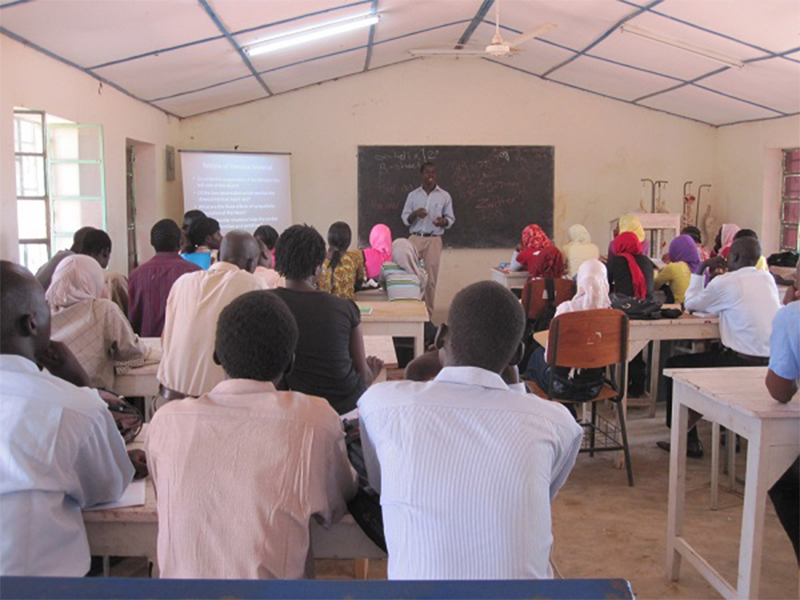 Sometimes you have to make do with the limited resources in front of you. This is where Thomas excels.

One week Thomas was visiting his students at a hospital in rural Uganda when two emergencies arose and there were no available surgeons or anesthetists.

One young man was struck in the forehead by a falling boulder. Thomas put him to sleep and had to use OBGYN surgical instruments to open his forehead and stop the bleeding that was pressing on the front of his brain. 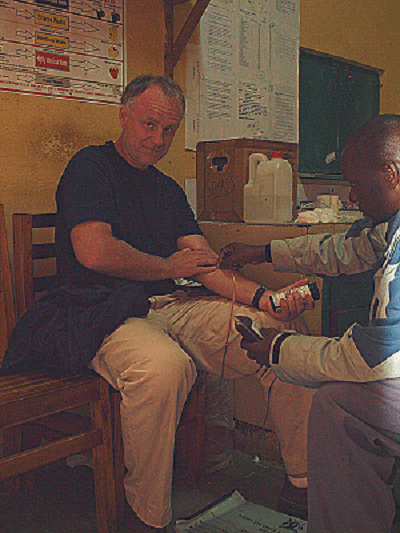 Just days later, another teenage boy was struck across the abdomen by a falling tree. The boy had such severe internal bleeding that his heartbeat was barely perceptible, he had no blood pressure, and was having difficulty breathing on his own.

Thomas swung into action, put a tube down the boy’s throat to stabilize his breathing and prepared him for emergency surgery.

Thomas realized that the boy would die without blood. With a scalpel in his right hand, he opened the boy’s abdomen and gave instructions for a makeshift transfusion with Thomas himself as the donor. Tubing was inserted into Thomas’ left arm to give the boy life-saving blood.

Both boys recovered and Thomas has gotten reports that they are healthy today.

Thomas has personally cared for thousands of people in need all around the world: 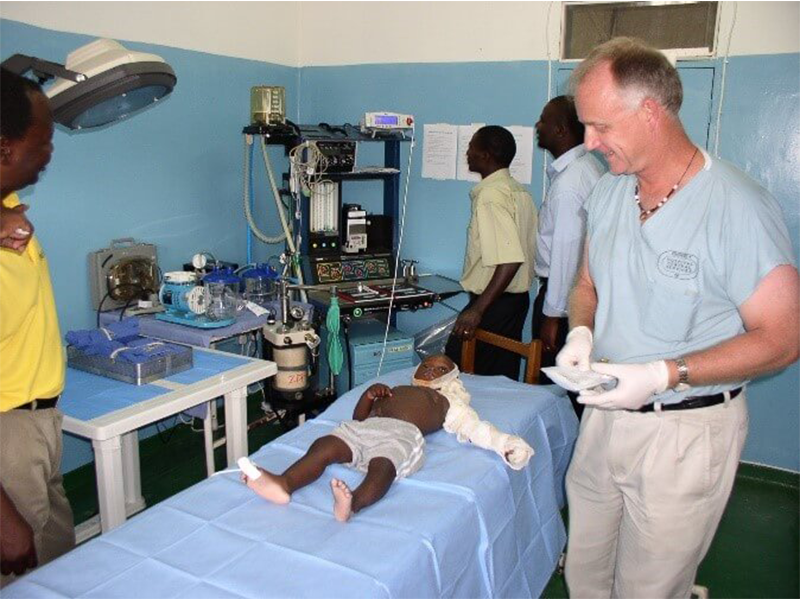 Thomas preparing surgery on a boy with burns in Zambia. 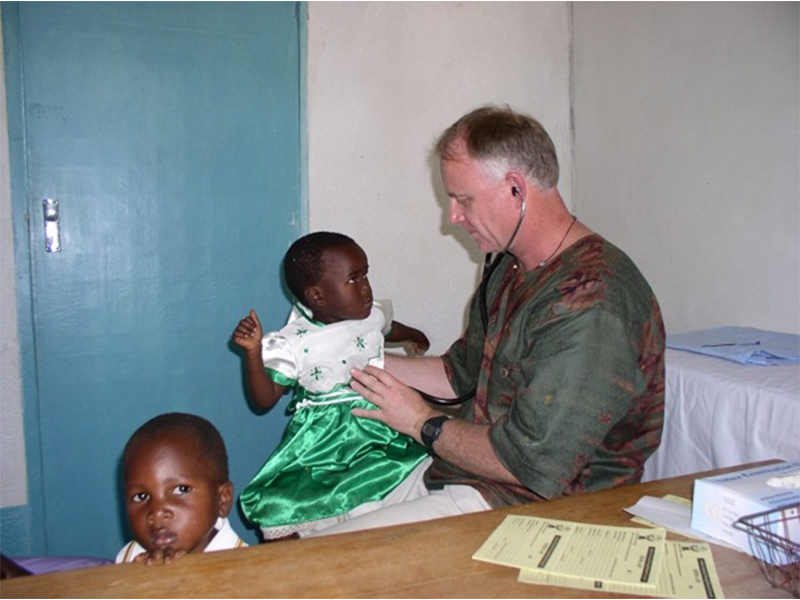 Thomas caring for a recovering malnourished child in Kenya. 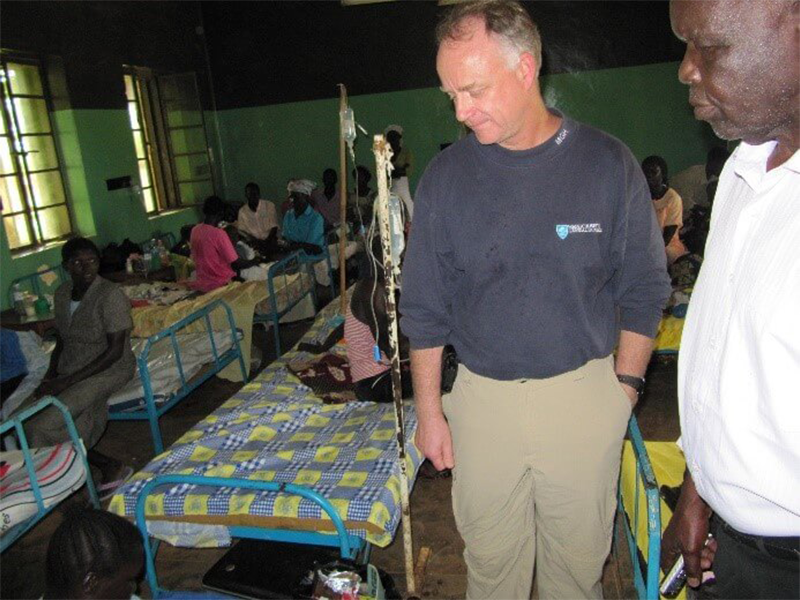 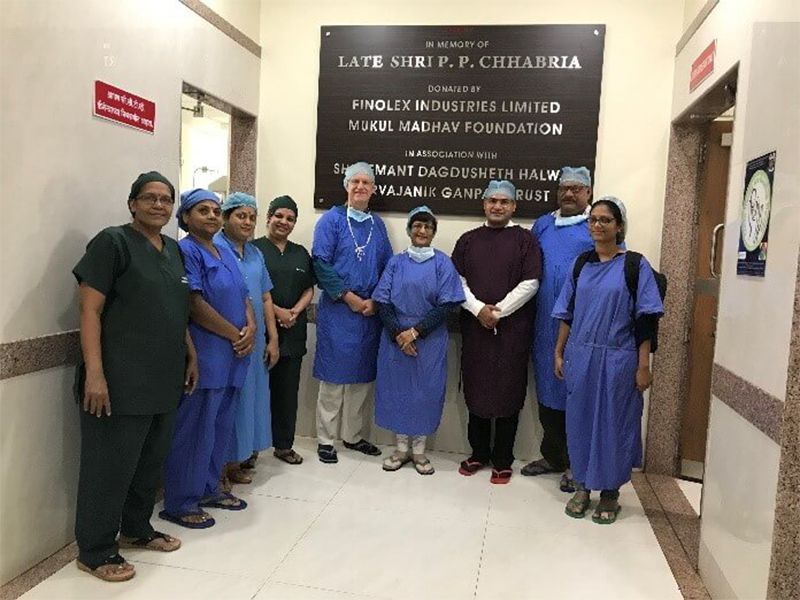 Thomas as a visiting professor in Nagpur, India.

Practicing Emergency Physician During The Pandemic

Thomas still serves as a senior emergency physician at Harvard and practices in the Massachusetts General Hospital emergency department several days a month.

Here is Thomas holding the infant of one of his critical patients– providing expert care and comfort to both. 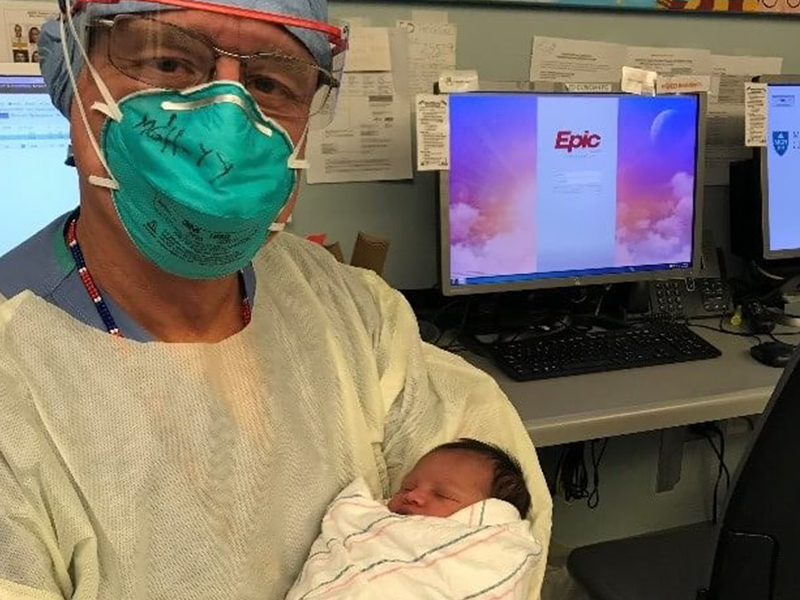 These past 19 months have been challenging for all of us, but especially for Thomas and his colleagues on the front lines of the epidemic.

Thomas has cared for countless COVID patients at MGH and has held a dozen COVID webinars for senior doctors and health leaders in Kenya, Uganda, Tanzania, India among other regions, teaching them best practices for their facilities and patient care during the pandemic.

Vayu Innovations was born out of the need for high-quality affordable engineering solutions to pressing health challenges in low-resource settings. Large, Western organizations are generally risk-averse and focused on financial gains, rather than prioritizing high-quality care around the world. The result is that many common medical solutions are unaffordable to the populations that need them most.

Thomas founded Vayu as an extremely efficient and more nimble entity that can help address healthcare crises that at-risk regions of the world face, without the bureaucracies and costs that limit the effectiveness of most institutions.

Under Thomas’s leadership, Vayu has developed two highly impactful innovations that will both save and improve the lives of millions of newborns, infants and children every year. Currently, Vayu-bCPAP Systems are being used to treat infants in major teaching hospitals in Vietnam, the Philippines, India, Italy, Kenya, Nepal and Tanzania.

These photos show Harvard College student volunteers assembling bCPAP Systems to send all over the world: 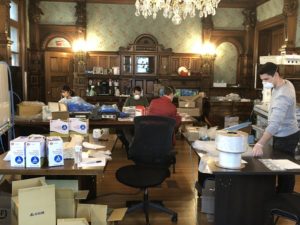 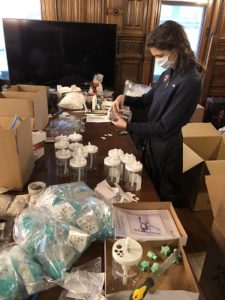 And this photo shows a newborn on a Vayu-bCPAP System at Ilocos Training and Regional Medical Center in the Philippines. 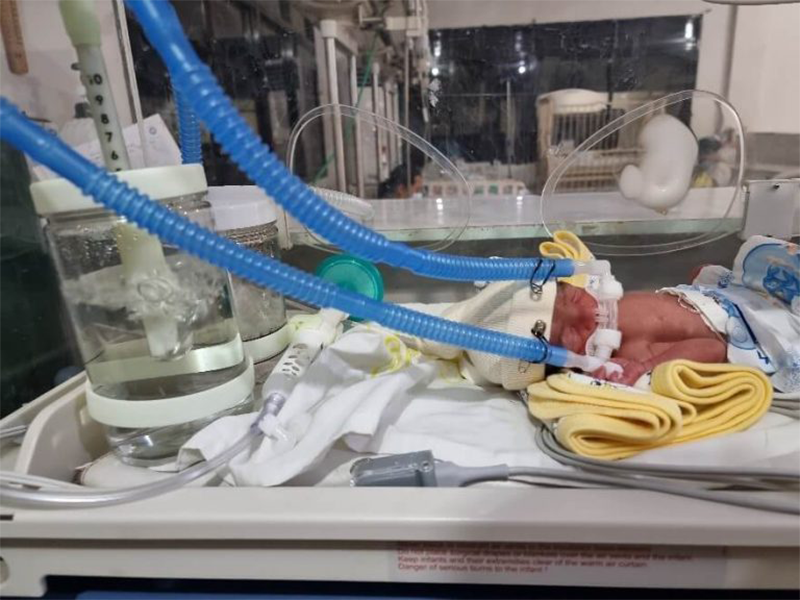 Over 100 infants have already been treated at Ilocos Medical Center alone in their first 3 months of use. 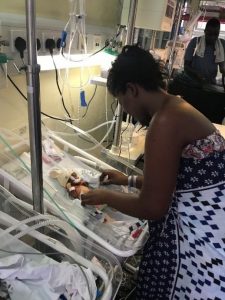 On the left is one of over 2,000 newborns successfully treated with Vayu bCPAP Systems at Muhuimbili National Hospital in Tanzania (being cared for by her mother).

Vayu is poised to help millions of newborns, infants, and young children annually.

Other Awards, Accolades, And Accomplishments

Outside of his leadership in global health, Thomas is often invited to speak at high-profile forums and leading universities around the globe and has focused on maternal, newborn, and infant survival and health since 2004. 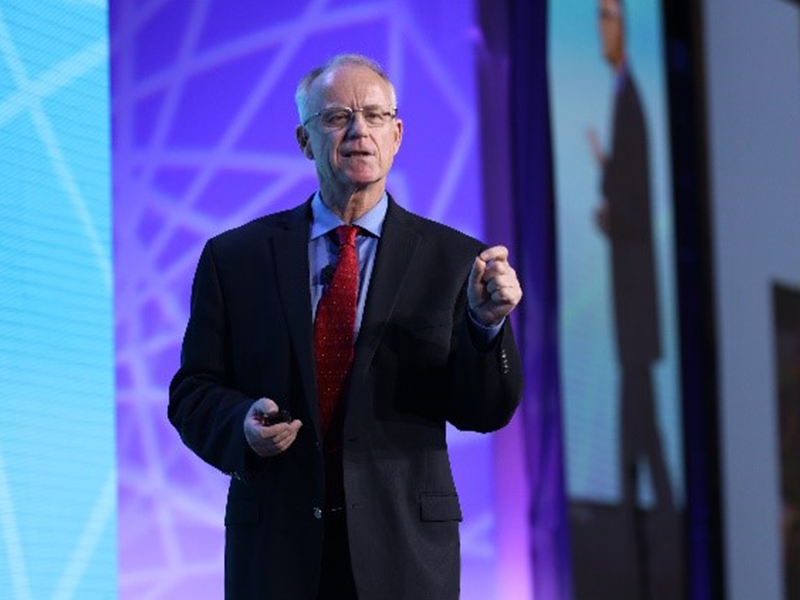 On June 3, 2019, in a joint UK and India government ceremony in the House of Lords in Parliament (London), Thomas was bestowed the title, “Lord of the Planet in Medical Sciences”. 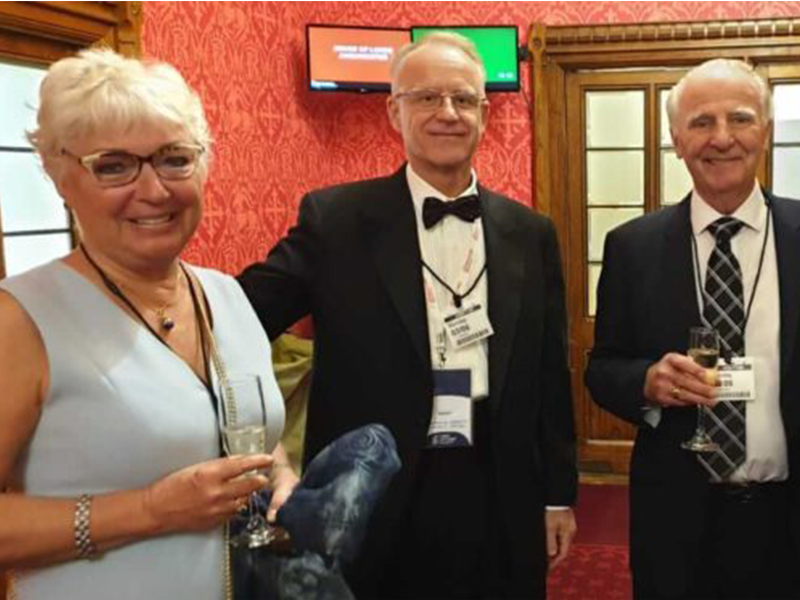 In August of 2019, the Indian government honored Thomas with the “Award for Excellence in Maternal and Child Health in Rural India”. 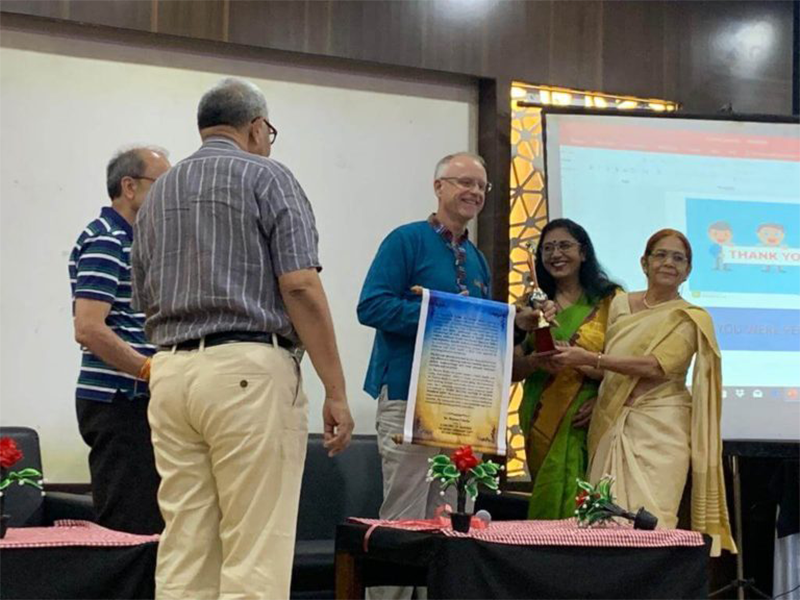 On October 21st, Thomas is being recognized by FIGO (the International Federation of Gynecology and Obstetrics) with the “Recognition Award to Non-Obstetrician / Gynecologists”. This award will be delivered at the FIGO World Congress and is intended to honor a highly distinguished person outside the OBGYN profession who has performed exceptional service to women’s health.

Thomas has opened several film festivals and has been profiled for his work by BBC, NPR, FOX Television, ABC, CBS, the London Financial Times, the New Yorker, the Seattle Times, and the Boston Globe, among other news outlets.

Thomas lives with his lovely wife Sara in Medford Massachusetts shown together below.

And, to welcome his 6th decade of life with enthusiasm, Thomas is competing in 6 Triathlons this summer! 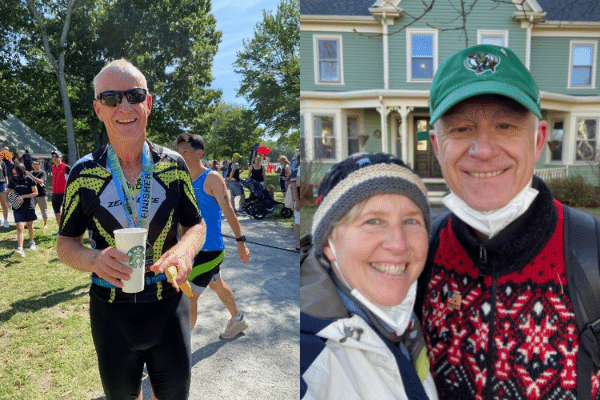 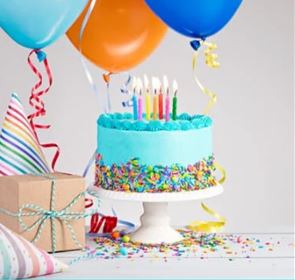 Thomas is about to celebrate his 60th Birthday this year!

After decades of service and altruism, all of us here at the Vayu Global Health Foundation want to celebrate Thomas’s life and accomplishments by giving him the one thing he really wants….to culminate our work to make the Vayu-bCPAP available to help millions of children worldwide.

We have a concrete, achievable plan to make this a reality in the next 2 years.

But we do need your help. Please take a moment to read about our plans and help us make Thomas’s birthday wish come true.

Help Us Celebrate — Read Our Plans